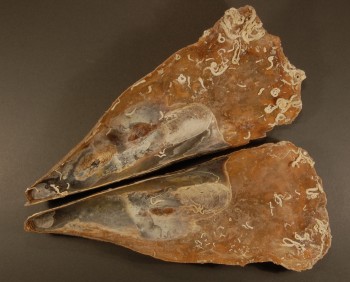 Fan Mussel: pinna fragilis. Bring Deeps. 1 complete. Fan mussels are one of the rarest shells in the UK and are protected under the Wildlife and Countryside Act because of their national importance. This specimen from the Bring Deeps, Scapa Flow is one of two in Stromness Museum and was donated in 1951. The shells can grow almost half a meter long and live for up to 32 years. According to fishermen’s lore, fan mussels should be cast back into the sea if they’re caught, as they feed on the remains of dead sailors. Fishermen believed this, because the byssus threads look remarkably similar to human hair. The threads can be woven into a beautiful golden cloth, and this weaving still takes place today on the island of Sardinia. A live shell was discovered in Scapa Flow in 2011, sheltered in the Horse Mussel beds near the wreck SMS Karlsruhe.