Nephrite jade adze. The blade is made from nephrite jade, a distinctive rock which has its source in New Zealand. Highly valued by Maori communities, used to make important tools, weapons and ceremonial items.

Known to the Maori as Pounamu, these visually striking greenstones are found in western and southern parts of the South Island. Dense, strong and capable of holding a fine edge, Pounamu was won from the river and from dedicated quarries, worked by a combination of flaking, grinding and polishing. A Pounamu taki carried a mana or prestiege that adheres to their owners. And while many were used as tools or weapons, some were reserved for formal occasions by families of high standing.

Circulated in important exchanges, they helped to cement alliances and resolutions between people. Handed down accross generations, with names that were recited on important occasions, these were tools with influence. Early ethnographers record that important ceremonial blades -toki poutangata- required special treatment. On the death of a chief, the green blade would be taken from its elaborate wooden hafts so that the latter could be buried with the desceased. Once a successor had been chosen, the old blade would be bound to a new haft, thus ensuring a continuity of mana. 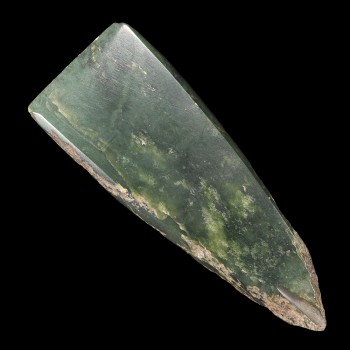